A Render Farm consists of a group of networked computers working together to complete large rendering tasks. Render farms proceed silently, without graphically displaying the renderings as they progress, or you can run the Render Farm Display tool to display parts of the image as they are completed. Using the Render Farm allows you to use more compute power for lengthy tasks at the expense of some interactivity.

The IRender nXt Render Farm Software is sold separately from IRender nXt itself. (However a 2-CPU Render Farm is included with the 3D Design Studio ). Also A 30-day 2-CPU trial is available for testing.

Neither SketchUp nor IRender nXt itself are required on computers which will only be used for rendering farming.

You can download the IRender nXt Render Farm software from the McNeel nXt Forum:

You can use a 2-CPU Render Farm in trial mode for 30 days.

After 30 days, you will need to purchase a 2-CPU License, or an unlimited CPU license, from Render Plus.

The 2-CPU License for the Render Farm is also included in the 3D Design Studio .

Installing and Configuring the Render Farm

Create a shared folder for use by the render farm. (Create a folder on a machine which is accessable by all the other machines which will process or use the Render Farm)

All of the network rendering computers must have read/write access to this folder. The shared folder should have a lot of available disk space to store both data (input) and images (output.) 20 - 200 GB of available storage are recommended. You must perform the following four steps on each computer you plan to use in the render farm, including any nXt workstations which will submit jobs to the render farm:

The Render Farm is now configured. To verify that the farmer machines are responding run the Render Farm Monitor from the Start menu on any of the workstations. The machines should appear in the Configure Machines window. If you wish to exclude a machine from participating in the render farm, you can select it, right click, and choose Suspend.

Submitting a Job to the Render Farm

There are two modes to start a Render Farm job:

Perform the following steps to submit a job to the render farm:

After the job is complete, output can be found in the job's Output folder. 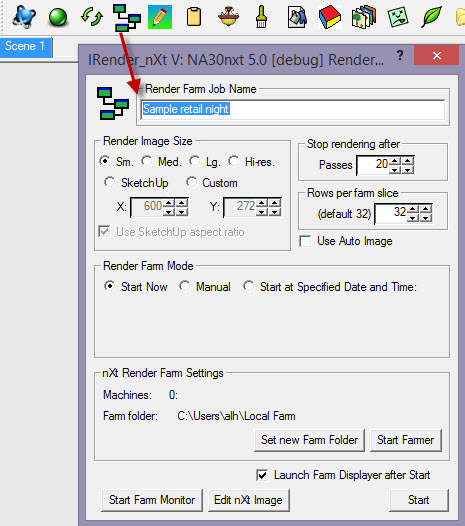 The total number of tasks should be at least twice the number of cores on all of your machines to ensure maximum usage of all machines.
The default value of 32 rows per slice will work well unless you find you are not using enough of the cores on your machines.

The .nXtImage and .JPG (or .PNG) file will automatically be created when the task is complete.

(This is probably not working yet)

Start at Specified Time - enter a date and time for starting the job.

Starts the Farm Monitor, or gives it focus if it is already running.
The Farm Monitor shows the status of current Farm renderings.

If this is set, the Render Farm Display window will stay up after the job is started. This window will display each slice of the rendering as it completes.

If this is unchecked, you will have to use the Start Farm Monitor button to track progress of the Render Farm and display partial, or completed images.

Click Start after you have made any changes to the settings to start the Render Farm process.