Render Plus celebrates 20 years of providing 3D CAD and Visualization solutions for designers.

Render Plus was founded in 1987 as a spin off to the ARRIS CAD System. Initially Render Plus (then know as ARITEK) developed more then a dozen add-on applications for ARRIS, including Sculptor’s Workshop - to create 3D objects - and Render Plus – a Ray Trace Renderer. Render Plus is still the developer for ARRIS CAD which is used by a large number of Architectural, Engineering and Design firms.

In 1992, Render Plus developed a stand-alone CAD Engine, called ACE (ARICAD CAD Engine). This was used to create several CAD application which did not need an underlying CAD system – such as ARRIS or AutoCAD. Programs such as Landcadd’s “Visual Landscaping”, Planix’s “3D Exterior Designer” and Softdesk’s “Pro Builder” revolutionized the CAD applications world. The most successful of these ARICAD products was “Giza” which is used by thousands of Office Furniture dealers to layout and visualize furniture workstations.

For the past 5 years, Render Plus has been creating interfaces to Google SketchUp and add-on programs for SketchUp – for Ray Trace rendering, 3D viewing, component placement, and reporting

The sections below highlight new features in Render Plus products.

Fog sample in SketchUp and IRender.
(One of these crosses is blue and has a long arm, because I wanted to be able to see where the fog was supposed to stop.) 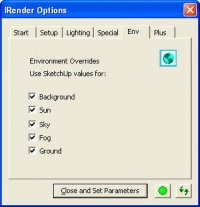 Many environment settings are set automatically from SketchUp. If you load the AccuRender Environment, you will be warned that the SketchUp settings will not be used.

You may use the Env tab of the Options wizard to specify which of the values to use from SketchUp, and which to use from the AccuRender Environment wizard. 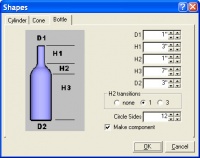 Shapes is a toolbar of RpTools to create simple 3D Shapes.

Space Design has been re-released as a free, add-on for SketchUp to provide capabilities to select, place, move, copy and rotate components.

New Shape wizards have been added to create simple shapes such as a cylinder or a dome.

There was a bug in 3D PDF which was displaying edges of smooth objects.

This has been fixed in the latest version.

The latest version of RpReports allows you to use top-level groups which contain components and assemblies. 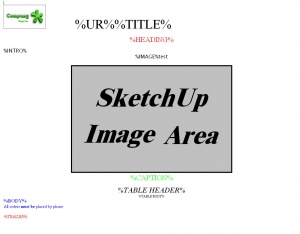 RpReports Report Templates are used to define the layout of your reports.

The The template is stored as an RTF file which can be edited with WordPad . Using RTF you can specify fonts, sizes, justification, and colors for text. 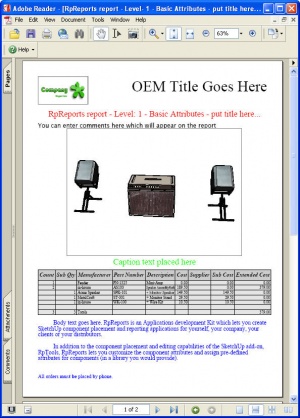 All reports are created in PDF format which simplifies printing, distribution to clients or placement of reports on web pages.

In addition, the client may export the report as a .CSV file for use with Excel for further customization.