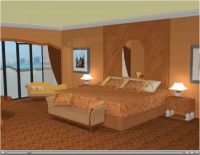 Emirates Palace from the 3D Warehouse
High quality animations of SketchUp models can be made with IRender nXt. In IRender nXt animation is created by rendering scenes, moving the camera, and rendering the next frame.

Batch Rendering will allow you to render models which are 5 to 20 times larger.

Also, Batch Rendering can will allow you to render the drawing on another computer on your network.

We have added support for SketchUp Sections. 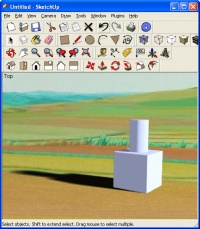 Rendered model with shadow, placed as an alpha image on top of a background image.
(You can composite the images in SketchUp if desired.)

You can create a Visible Light Path effect for a IRender nXt rendering.

This will emulate the effect of a light beam in a smoky or foggy room.

We have ported the IRender nXt engine to Revit as nXt for AccuRender Revit .

Note the line down the center of the background, because it has been shifted.

Now you can enlarge or offset a Background Image, or treat it as a cylindrical or spherical projection.

Now you can change the IRender defaults which are used for new models, and also save defaults in disk files, making it easier to load and use the same settings in other models.

If you haven't tried IRender nXt yet, download a trial version from: Downloads Page

If you have already tried it out, but want to take another look, request a new 30-day trial from Render Plus Support Email